Claterna, a Roman city: a history as long as that of the Roman presence in our region, from the 2nd century B.C. to the 6th century A.D.; eight hundred years pervaded by a great deal of everyday life linked to some far-reaching events. As happened in so many other cities of the Roman Empire.

The name is enough to evoke the pre-Roman memory of the places, when first Etruscan and then Celtic peoples chose to live permanently in these territories to exploit their rural potential and the possibility of controlling important communication routes.

On this important substratum, which has begun to return tangible traces even in Claterna, our history begins; let us now listen to the words left us by an authoritative voice of the past, Marcus Tullius Cicero, orator, philosopher and one of the protagonists of Roman political life at the end of the Republican age 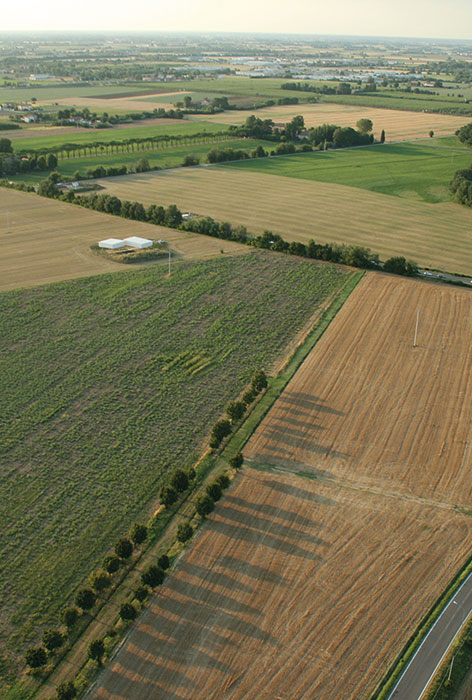 The armies that besieged (Modena) must have been not very considerable, for the garrison with which Antonio held Bologna was strong. But there were also our Irzio at Claterna, and Caesar (= Octavian) at Imola, both with valiant armies; and at Rome Pansa had prepared large forces by enlisting the Italics.”

It was with these words that our city emerged from obscurity: in 43 B.C. it witnessed the so-called “war of Modena”, an episode that represented the launching pad for a young twenty-year-old general; and when, sixteen years later, this general named Octavian was given the title of Augustus by the Senate, he was to become the first Roman emperor, to everyone’s satisfaction.

Moving armies between the centres mentioned by Cicerone undoubtedly meant using the consular road of our region, the Via Aemilia (today’s Via Emilia) opened in 187 BC. as the backbone of the infrastructural arrangement of the Regio VIII Aemilia. Claterna was born at the crossroads of this road, just where the road crossed the Quaderna torrent and met the Via Flaminia Minor: it does not seem coincidental that in this area, later occupied by the city, some roads pointed precisely in the direction of the geographical north, according to a widespread practice in ancient Italy.

The city, thanks to its itinerary value and the agricultural vocation of its hinterland, developed until it reached the maximum size of about 18 hectares; a medium-sized centre, therefore, which found in the street its continuity of life and the connection with the ager reordered by canals and roads of the centuriation and scattered with farms. At the time of the ‘Modena war’, Claterna had already become a municipium, an administrative, economic and political centre serving the portion of plain and hillside delimited by the Idice and Sillaro streams.

At the end of the Augustan age, the city had a complete structure and a regular shape: streets laid out in a geometric pattern starting from the Via Emilia; blocks occupied by public and private buildings, taking care to respect precise uses.

The public sector opened up almost in the centre, flanked by the via Emilia (decumanus maximus) and bordered by the main buildings of city life: porticoes, a temple, the civil basilica; the large rectangular open space was the site of the market, but also a privileged space to house the honorary monuments, depositaries of public memory, and a place to meet and socialise.

To the north-east, the theatre, the site of Greek-Italic-style performances (comedies, tragedies, farces, mimes), while to the south-east, beyond the Via Emilia, recent investigations suggest the presence of a large thermal building for wellness and body care; the location of the amphitheatre, perhaps a temporary structure, for which an inscription from the beginning of the first century A.D. recalls ludi, or gladiatorial games, has yet to be discovered.

There is no lack of references to important political ties, such as the interest of the imperial family known from the fragment of an inscription mentioning Agrippa, son-in-law and general of Augustus, as patronus.

Private spaces, and in particular houses, occupied the rest of the blocks; the diversified typology of housing solutions that the excavations are revealing sheds light on a socially and economically articulated population.

Families from wealthy backgrounds lived in domus of considerable size, decorated with cocciopesto and mosaic floors and frescoes on the walls (domus dei mosaici, domus del tralcio d’acanto, domus del fabbro); but a multitude from the middle or lower classes must have occupied single-family houses of simpler quality, suitable also for the work they did.

But the city did not end here: at least two suburbs, the western and eastern suburbia, had sprung up along the Via Emilia with specific functions: the workshops of the craftsmen, who worked metal, glass and clay, and the necropolis, the space reserved for the dead and for family memory declined also in public 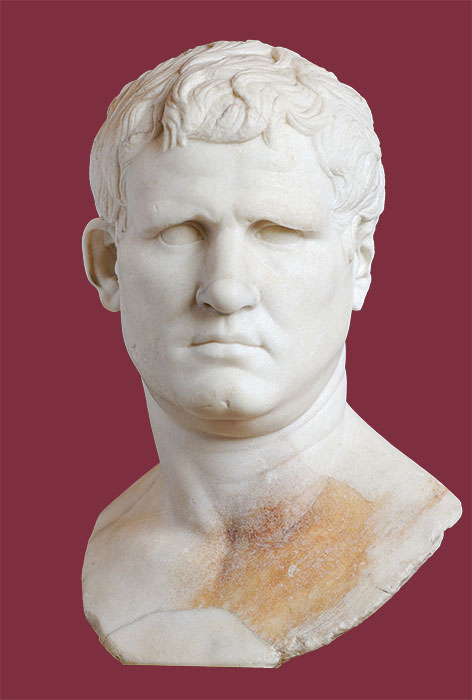 Several citizens of Claterna sought space for their political aspirations: such as Publius Camurius Nicephorus, a seviro who was also in charge of the cult of the imperial family and who offered the city public games; religion was closely linked to political life and elements such as the dedication of the temple of Apollo Augustus or the honorary inscription to the emperor Maximinus the Thracian and his son Maximus confirm the duration of the close relationship between the city and the imperial family.

From the end of the 2nd century A.D. the Roman imperial system entered a crisis and a generalised feeling of insecurity spread; we hear once again a voice from the past through the words of Bishop Ambrogio of Milan, towards the end of the 4th century A.D., describing a trip to the regio Aemilia.

Coming from Bologna, you left behind you Claterna, Bologna itself, Modena, Reggio, you met Brescello on the right, Piacenza appeared in front of you, resonant in their names of an ancient nobility; and you reflected on the ancient cities of flourishing peoples, while pitying you observed the uncultivated fields that stretch to the left of the Apennines, and you walked away accompanied by a sense of painful sadness. So then, with a single glance, you saw the corpses of half-destroyed cities and the obvious ruins of those lands… forever torn down and destroyed…”

Apparently, something dramatic and overwhelming seems to have left a picture of destruction and ruin; today, archaeological investigations help us to understand better and to place Ambrogio’s words, of an exquisitely literary flavour, in a better defined historical framework.

The crisis, through a gradual process of transformation, promoted the emergence of new models of population and the towns along the Via Aemilia adapted to it in different ways: in Claterna the signs are evident, both in the redevelopment of some blocks and in the complete abandonment of others; gradually some neighbourhoods, such as the public area, fell into ruin, then the settlement was concentrated close to the Via Aemilia.

Certainly the functions changed: between the 4th and 5th centuries the city became a village, a resting place within a still functioning road network, a market place and a place for craft activities. But attempts to adapt did not produce long-term results and during the 6th century AD Claterna was abandoned.

If you want to investigate further: http://www.archeobologna.beniculturali.it/bo_ozzano_emilia/claterna.htm#Aggiornamenti

If you want to learn more about the events of Claterna as a Roman city, we suggest you start with two texts that you can find in the Biblioteca Comunale “8 marzo 1908” of Ozzano dell’Emilia and in other libraries in the province of Bologna: